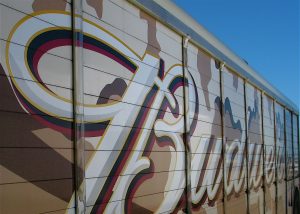 Budweiser of Clarksville and NRS combined forces to help create a special day for our military families at Ft. Campbell, KY.  Their secret weapon – Rick Gerber, the A-B Master Illusionist.

Rick’s war room strategy was to hit um’ hard with a first wave of FUN!  The day’s festivities was kicked off with 30 minutes of shock and awe as Rick performed his magic show for hundreds of military personnel and their children. Once he had everyone smiling and laughing, his next mission was to perform strolling magic as families ate their lunches.

In the meantime, Budweiser of Clarksville was mobilized on the tarmac and sampling cold O’Douls and 180 Energy Drinks. Soldiers also had an opportunity to roll the Budweiser dice for a chance to win $25,000.  Lines got long, so Rick joined up with his unit and kept everyone entertained while they waited for an ice cold drink and their shot at Lady Luck.

That night the battle raged on when Christopher Broadrick, w/Budweiser of Clarksville, took Rick around to perform in several on-premise accounts, including an Outback Steakhouse, which was also a major sponsor of the Ft. Campbell event.

“Rick fit right in with the military and their families, bringing enjoyment to everyone he made contact with. Rick is no stranger to providing entertainment and he provided real added value to our effort. That night he took the show into the bars of downtown Clarksville.  Rick’s interaction with both retailers and consumers was well accepted and appreciated.”

Another day in the trenches and another successful mission. In the end, our competition was once again crushed!  St. Louis can rest at night knowing that Rick Gerber is in the field.

LOOK THROUGH THE FT. CAMPBELL PHOTOS