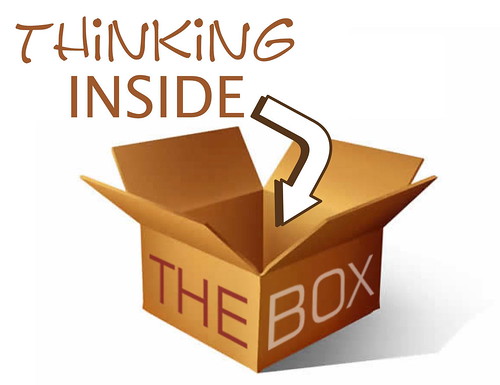 For over thirty-years we’ve been hearing the same old cliché, “Think outside the box”.  I say cliché because that’s exactly what this mantra has become.

People who say, Think Outside The Box, are themselves stuck in the confines of a single box and trying to escape.  If they weren’t, they would not continue referencing the same overused line.  I understand this adage is symbolic, but at its core it’s sending the wrong message.  It assumes that boxes are a bad thing and that you need to escape from within in order to be creative.

I say, “Think INSIDE the box.”  Heck, we do it anyway. It’s human nature. The proof is in the fact that we haven’t been able to get out of this metaphorical box for decades.  If we could, we would not STILL be trying to think outside of the same damn box.  You with me?

Celebrate the box.  But instead of just a single box, let’s start thinking inside of an unlimited number of boxes!  Use this freedom to put everything inside of a whole bunch of boxes – gigantic boxes, tiny boxes, wooden boxes, cardboard boxes, boxes that shrink or expand, decorated boxes, square boxes, odd shaped boxes, bento boxes, even sand boxes (they’re fun to play in).  Boxes are a good thing, as long as you keep track of your boxes and never lose any of them.

Organize your boxes so that you can find them when you need to. Have boxes for your thoughts, projects, ideas, dreams, feelings, inspirations, insights, experiences.  Store these boxes on figurative shelves so they’re easily found.  This way you can open up just the right box whenever you need it or want to add more stuff inside. Cherish your boxes.  Jump inside and think of them as your cozy home. Treat them with reverence and respect.

Boxes should be essential to expanding your creativity, not something to break out of.  Yes, thinking INSIDE the box is actually critical for gaining personal and creative growth and should never be taken for granted.  The secret is to have an infinite number of boxes.

It’s important to go through your boxes occasionally. Dust them off, open them up and remind yourself of why you put that, whatever it is, inside your box in the first place.  Sometimes a box may have something in it that needs to mature or grow.  Nourish these boxes so that, when the time might be right, they’re ready to be opened and it’s contents let out into the world.

You can also combine your boxes or share your boxes with other peoples’ boxes.  Of course, you guessed it, this will create more boxes.  Rejoice in the fact that you have lots of boxes.  Don’t try to escape from them.  Think INSIDE The Box.  Boxes are good – really, really good.

3 thoughts on “Thinking INSIDE The Box”